Error: Twitter did not respond. Please wait a few minutes and refresh this page.

Where the Goodwill Went:

Where the Goodwill is Going:

Goodwill program holds Back to School event at The Bronx

On the last week of August and to get children ready for school, our Jobs-Plus program in The Bronx held its 3rd Annual Back to School bash. The Goodwill NYNJ program distributed 300 backpacks filled with books and supplies. Kids also received brand new Carters pajamas and new and gently used books.

The bash was truly a community event. The BLK PROJEK solar powered bus provided smoothies for the kids. The cold beverages helped make the last dog days of summer bearable! The New York City Parks Department provided games and equipment for the children to play during the event.

Jobs Plus is operated by Goodwill NYNJ to offer job training and employment support for residents of the Clason Point, Sack Wern and Monroe New York City Housing Authority developments.

How PS 40 campers spent their summer?

One of the most enjoyable field trips for campers at Goodwill’s COMPASS program at PS 40 in Queens was to the Museum of Moving Images in Long Island City. Kids learned about the evolution of TV and Movie filming. Campers put a different soundtrack to a movie scene and they even got to see themselves on screen!

But the most memorable moments took place during the last three days of camp.  The campers participated in the Borough Olympics. They split up into five teams, wearing different colors, which represented each of the New York City boroughs. Teams competed in relay race, the “Let Me See You Whip” dance off, dodge ball, and “steal the bacon.”

Campers and staff designed banners for their teams. Our campers got a chance to show what they learned during field trips and summer camp Jeopardy at PS 40.  Topics included Name that trip,” Name Mr. White (Compass Program Director) joke of the day, and Who is from what Borough?

With 100% participation of campers and staff, the water balloon fight was the most fun activity. Everyone got wet including Mr. White! 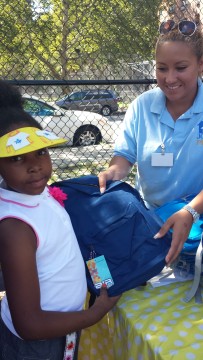