Error: Twitter did not respond. Please wait a few minutes and refresh this page.

Where the Goodwill Went:

Where the Goodwill is Going:

Eight months after Superstorm Sandy, we’re still actively invested in rebuilding our communities and helping those affected by the disaster – after all, we’re Goodwill: we’re all about helping people get their lives back on track. 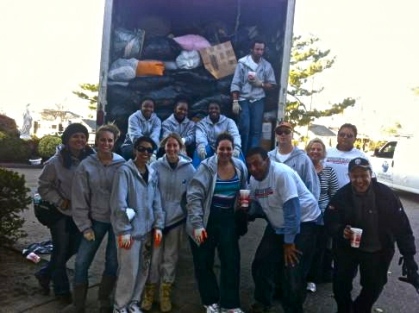 When Sandy hit in October 2012, coastal New York and New Jersey communities turned to Goodwill Industries of Greater New York and Northern New Jersey for help. Specifically, government and civic leaders knew that Goodwill’s experience in collecting and distributing donations, and existing partnerships with local businesses and other nonprofit agencies would prove invaluable in relief efforts.

Goodwill answered the immediate call for help, and continues to provide support to individuals and communities affected by the storm. Here is a quick look at GoodwillNyNj’s Superstorm Sandy Top 10 Relief Efforts:

1. To help prevent the generous outpouring of donated items from becoming a hazardous health risk, the City of New York Sanitation Department asked Goodwill to process and distribute goods to shelters and other nonprofit agencies. Many goods had been left outside for victims to pick up, posing safety and sanitation concerns.

2. The City’s Economic Development Corporation and the Mayor’s Office for People with Disabilities partnered with Goodwill on the Industry City warehouse and distribution center. To get the donated facility space up and running quickly, the city included it as part of a broader initiative to combine city, private sector and nonprofit resources to aid those hardest hit-particularly residents of Staten Island, the Rockaways and Long Beach.

3. Immediately after the storm hit, Goodwill began working with the United Way and other organizations and shelters throughout the Northeast to receive and distribute much-needed items such as temporary mattresses, blankets, and basic survival items including water and personal care products.

4. Only 10 days after the storm, on Veterans Day 2012, Goodwill partnered with Bank of America’s Military Support Group and the Ritz Carlton Central Park Hotel to deliver goods and hot meals to storm victims.

5. The Goodwill® truck collected as many bags of donated clothes, food and supplies as possible from St. Thomas More Church on Manhattan’s Upper East Side to sort, process, and distribute to residents of Breezy Point and the Far Rockaways.

7.  Goodwill volunteers worked with Team Rubicon, a disaster relief organization uniting the skills and experience of veterans with first responders to rapidly deploy emergency response teams. The Goodwill-Team Rubicon crew helped two homeowners canvass the debris for family valuables and remove damaged items from their properties. While basement flooding made salvage difficult, one homeowner was grateful to be able to recover two items holding tremendous sentimental, as well as financial, value: his grandmother’s Persian rug and his surfboard.

8.  Goodwill also worked with United Way and other organizations and shelters throughout the Northeast to receive and distribute much-needed items such as temporary mattresses, blankets and basic survival items.

9. To help the continuing employment challenges created by the storm’s destruction, Goodwill Industries of Greater New York and Northern New Jersey partnered with 19 other non-profit organizations in May to host a Post Sandy Job Fair at Resorts World in Jamaica, Queens.

10. Goodwill stores in New York and northern New Jersey continue to offer $50 worth of store credit to storm victims for clothing and household good purchases. Anyone affected by Superstorm Sandy can bring documentation from FEMA, Red Cross, or their insurance company to their local Goodwill store to receive the credit.